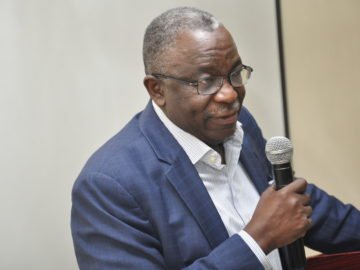 Jacob K. Olupona is Professor of African Religious Traditions, Harvard Divinity School and Professor of African and African American Studies in the Faculty of Arts and Sciences. He studied at the University of Nigeria, Nsukka and Boston University where he received his PhD in Comparative Religion in 1983. He is currently working on a new ground-breaking study of the explosive growth of evangelicalism across all branches of Christianity, expanding the current discourse that is largely focused on Pentecostalism by identifying its affect on and place in the larger context of Nigerian Christianity and society. Olupona has authored or edited numerous books, including Kingship, Religion and Rituals in a Nigerian Community: A Phenomenological Study of Ondo Yoruba Festivals and The City of 201 Gods: Ile-Ife in Time Space and the imagination, in which he examines the modern urban mixing of ritual, royalty, gender, class, and power, and how the structure, content, and meaning of religious beliefs and practices permeate daily life. His most recent edited volume, Ifa Divination: Knowledge, Power, and Performance analyzes the famous tradition of Ifa divination from perspectives as varied as theology, art and aesthetics, philosophy, and cultural studies. Olupona has received prestigious grants from the Guggenheim Foundation, the American Philosophical Society, the Ford Foundation, the Davis Humanities Institute, the Rockefeller Foundation, the Wenner-Gren Foundation, and the Getty Foundation. He has served on the editorial boards of three influential journals and was the president of the African Association for the Study of Religion. Olupona has received an honorary doctorate in divinity from the University of Edinburgh in Scotland and an honorary Doctor of Letters degree from the Obafemi Awolowo University in Ile-Ife and the University of Abuja, Nigeria. In 2008 he was awarded the highest distinction the Nigerian government bestows on civilians, the Nigerian National Order of Merit, and he was inducted into the Nigerian Academy of Letters in 2015. In October 2015, he was honored with the Reimar Lust Award by the Alexander von Humboldt Foundation, Germany.